With this year's cinematic release of "Saving Mr. Banks" and the 50th Anniversary of Disney's original "Mary Poppins," the Arts Club decided to fly in the world's most famous nanny for a holiday run at the Stanley Theatre. 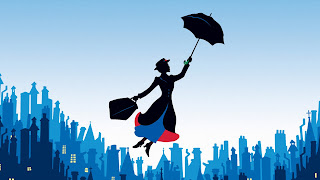 It had been awhile since I had seen a live production in Vancouver, but when I saw "Mary Poppins" on the Eventsand Adventures calendar, I threw in my umbrella and prayed for wind. Lucky for me, there were still tickets. 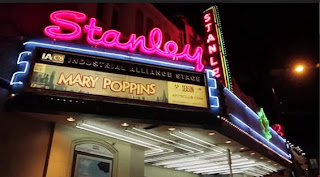 We met outside the theatre before the show and were given our tickets on a first come, first serve basis. I was given a ticket to the front row and I immediately wished I hadn't stopped for gas on the way to the theatre. But, as it turns out, the front row was fine for sight lines and superb for sound.
In my row their was myself and another guy and at least ten women. Excellent. We chatted before the show in the lobby and I got to know two new members I had never met. As luck would have it, one of them would share my armrest.
We ordered drinks for intermission and entered the theatre a full ten minutes before the curtain rose. This gave us a chance to continue our socializing and marvel at the stage decoration. We all exchanged stories about our childhood affiliation with Ms. Poppins. The only one who had never been served 'a spoon full of sugar' was the other male in my row. I told him he was in for some fun. He was worried he wouldn't be able to follow the story. I assured him this wouldn't be a problem.
The show proved to be a wonderful adaptation of the film, which the songs and narrative were taken from. I thought both Mary and Bert were strong leads. Sara-Jeanne Hosie, brought her own gifts to the role, painting a slightly stricter Mary Poppins. But Scott Walters, while full of energy and charm as Bert, pulled heavily from Dick Van Dyke's sooty bag of mannerisms. The only character that I found to be less than inspired was the character of Mr. Banks. I think Warren Kimmel missed the mark unfortunately. On the flip-side, I thought that Mrs. Banks, played by Caitriona Murphy, was a standout in her limited role. 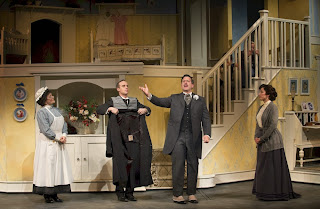 The rooftop chimney sweep scene is still my favourite. I love the "Step in Line" number. Maybe because my mom is a tap dancer and I know just how hard those moves are to pull off, especially upside down (whoops…spoiler).


The show ended with Mary magically sailing above the crowd, thrilling the younger members of the audience. Till next time Mary Poppins.
Posted by Vancouver Singles at 09:33