Stranded on a Peak

A quick story about choosing the right hikingpartner:
At the beginning of September I went on a hike with two female colleagues from work. Both of the girls were on work visas, one from Germany and one from Brazil. I had been out with the Brazilian girl a few times before, but we weren't really dating.
The day of the hike, we got up at 6:00 and made it up to the Cypress Mountain parking lot by 7:30. Our goal was the Lions - the western Peak. 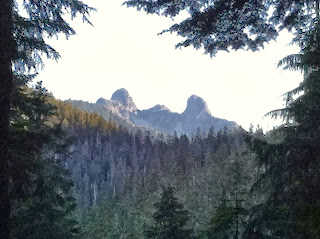 I had driven the girls and also made sandwiches for the three of us. We were well stocked for our full-day adventure.
The morning was beautiful and after a few hours of hiking we were rewarded with some amazing views of Lions Bay. We hadn't met anyone on the trail and had the whole mountain (range) to ourselves. We had a few snacks, took a ton of photos and kept up a quick pace. 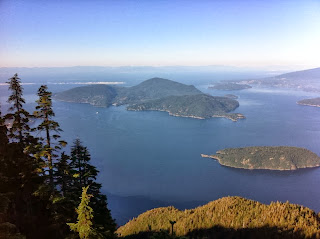 After ascending a fairly steep section of rough trail, we made it to the first of the two peaks of Unnecessary Mountain. Again, we stopped to take in the views and drink some water. After about ten minutes we decided to start again. We climbed down about fifteen feet and then I made an innocent step down off a rock and rolled my ankle. 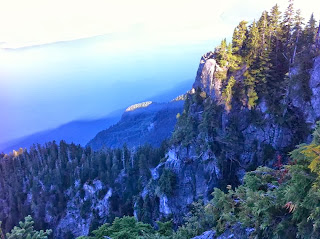 Instantly, I knew it was bad. The girls were very concerned and my Brazilian friend immediately gave me her sock to fill up my boot. I tried walking on it and came to the conclusion I shouldn't go any further. We talked about the situation for about half-an-hour. The girls were very keen to trek on, but I also knew my limitations. The ankle was done and going further, meant a longer hike back.
Then things changed a little… My Brazilian friend started making the point that she would only be on this ridge once in her life. She had seen the Lions every (clear) day on her way into work and was determined to summit them. She wanted to continue. The other girl eventually decided that she too would like to summit.
This was a bit shocking to me, as I just assumed we were hiking together. They asked if I would be ok hiking down on my own and I told them it shouldn't be a problem. That was my pride talking…
I did, however, explain that when I did get down I would need one of them to drive home because of the damage to my right foot. The German girl volunteered and said she would be cool with driving home.
And on that note we split up, the two girls heading for the peak and me heading back with one good foot and a walking stick.
On the way down, the pain increased dramatically. It was nine km back and there were a number of portions where I had to simply inch my way down on my bum. I also lost my way once and had to walk back up a 50 metre section of rough 'trail'.
After about two hours I got a text from the girls:

We are going to lions bay with a guy we just met, he's going to give us a ride to cypress. I call you when we get there ;)

Amazing. The winky face was the kicker.
Fuelled by anger and self-pity I soldiered on.
Three hours later, with less than a km to go, my body started to pack it in. I left the trail and hobbled out onto the Cypress ski run. I could see my destination, but by this point I was moving at a pace of eight metres per minute.
When I finally reached the parking lot, the girls were nowhere in sight. I texted them and they informed me that they would be getting a ride back with their new guide. Aces!
I somehow managed to drive my car back downtown, using the emergency brake at traffic lights and other stops.
When I finally took off my boot, my foot was the size and shape of a CFL football; I went to the hospital the next morning.
The experience taught me a few things about myself and a few things about shared values, or lack thereof. ;)
Currently in the market for a new hiking partner.

Posted by Vancouver Singles at 17:13