The Most Fun You Could Ever Have On A Trampoline

Take traditional dodgeball, add a trampoline floor, season with coeds and you get a killer time.

After attending a few laid back events on my first two weeks of joining the Events and Adventures social club, I decided to try something a bit more active: Extreme Air Park. Sounds like a show that would air on the Spike network, but it's actually this super cool trampoline gym out in Richmond - Think IKEA ballpit, but for adults.

Located behind Silvercity, the venue boasts 42,000 sq. feet of interconnected trampolines.It's basically two full gymnasiums divided into a handful of activity areas where you can bounce, flip, shoot and play. There is a huge patchwork tramp area, two dodgeball courts, a half pipe bounce run, a basketball center (dunking is optional for the vertically gifted) and a freestyle foam pit jump area, for practicing all those snowboard moves you always wished you could pull off on the slopes. 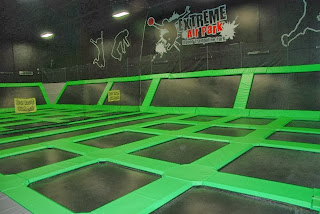 But of course, before any of that got underway, there was a long waiver to sign.

I met with the group in the lobby area where we filled out the necessary paperwork. I recognized one girl from the golf night, but the rest of the members were new to me. The host was Sharon. She was really excited about the event, which was cool.

The guy/girl ratio was even: four guys and four girls. There was another social group signing in, along with a kids birthday party.

We were given special socks to put on; apparently regular socks are not extreme enough. They had lockers for valuables, shoes and coats. Tip for those who choose this event in the future: Bring your own combination or pad lock. I took a gamble and left mine open, but it did have my wallet in it. Sometimes you just gotta trust people…

After changing and getting organized, we met up at one of the dodgeball courts. I watched for a few minutes, then took my first couple of bounces and waded in. If you remember my earlier post about the Lions hike, I sustained a pretty serious ankle injury in September, so I was a tentative about going full out. I had actually been a little worried all day about my ankle holding up, but it turns out it was fine.

We had the court to ourselves at first, which was nice for the group to get to know each other. After working out the rules - start with the balls in the middle, call go, race to center court, grab and retreat - we began playing.

The balls we used were those red rubber balls from gym class. These were perfect because they didn't hurt when you got hit, no matter who was throwing and they also provided a decent amount of velocity.

One of our members enjoyed the bouncing more than the throwing. Her infectious laugh had us all busting a gut at how much joy a simple trampoline pad can provide.

Our next stop was the foam pit. Again, I was tentative to dive in. I didn't know if my ankle could handle it. So I stood back and observed for a few minutes. Some of the kids there were doing some crazy aerials, with forward flips and lengthy swan dives. Even our host Sharon pulled off a flip.

I slowly started to build my courage and then the lights went out… Disco Tramp!

Perfect. With the house lights out and disco dots spinning across the floor, I saw my opportunity. Two bounces and I launched myself into the foam pit in a less than graceful forward plunge.

Lights back on. An even less graceful crawl out and I found I had lost my (ARIEL) sock to the foam demons. An over zealous Air Park employee informed me that I should not have been wearing my own socks beneath the aerial supersocks. Lesson learned. Fortunately, a group on the edge of the foam pit located another abandoned aerial foot cover. Problem solved.

Moving away nonchalantly, I checked out a few of the other areas, such as the basketball courts. This provided a little reminder of why I rode the bench in my senior year.

We finished our session back at the dodgeball court; Patches O'Houlihan would have been proud of our improved skills.

After retrieving our gear (yes, my wallet was still there), we agreed to meet up at the Big River Brew Pub for a post-game drink. The Canuck game was in the second period and my salmon sandwich was delicious; a nice pairing. This was also a good opportunity to talk with theother members without the fear of a red ball hitting you square in the face. We shared some laughs and some stories about home security and called it a night.

No love found, but by far the most fun I've had on a Thursday night in a long time.
Posted by Vancouver Singles at 11:59